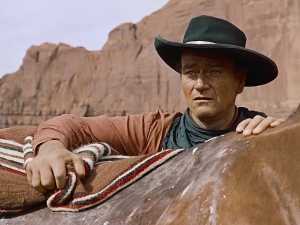 John Ford reteams with frequent leading man John Wayne in what is often considered one of the best Hollywood westerns ever made. Wayne plays Ethan Edwards, a loner returning home from the Civil War. After his brother’s family is murdered by Camanches, Ethan begins a five-year search for his kidnapped niece (Natalie Wood).

Wayne plays more than a charicature of himself for once, bringing emotional range and complexity to a career-defining role. The Searchers is a gorgeous film, shot in technicolor and VistaVision — old Monument Valley has never looked better. I love the way Ford often frames his characters within cave mouths or open doorways, including the famous first and final shots of the film. Storywise, the film works best in the first half-hour, up to the horrifying attack on the family’s home. Through the second act, the surrogate father/son relationship between Wayne and young Jeffrey Hunter is the most compelling part. Unfortunately, the final act is the least interesting, largely because the dramatic potential of Natalie Wood’s character is left completely untapped.