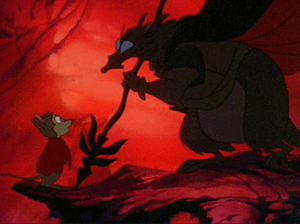 To save her sick child and move her home from the path of the farmer’s plow, a timid field mouse seeks out a colony of hyper-intelligent rats who are the product of medical experimentation. The Secret of N.I.M.H., based on Robert C. O’Brien’s Newbery Award winning novel, came along during a great Disney dryspell, when the most profitable animated films were a couple of shit-forsaken Care Bears movies. Animation needed an enema, and N.I.M.H. did just the trick, complete with bloody sword fighting, political intrigue, assassination, betrayal, and even mild profanity (one ‘damn’). How could a kid not love it? And as I’ve grown up, I’ve admired it more for its handmade artistry (look, Ma! no computers!), as well the independent spirit in which it was made.

Director Don Bluth (An American Tail, The Land Before Time) was a former Disney animator who felt the studio had lost its way in the ’70s. So he and partner Gary Goldberg scraped together just enough resources and talent to make their own animated feature film. A lot of the work you see in N.I.M.H. was done in their own garages, by artists working around the clock for no extra rewards. I don’t know about everyone else, but I can see the love put into this thing.

In terms of dramatic storytelling, The Secret of N.I.M.H. delivers the goods as well as any live-action fantasy.  Bluth does an incredible job staging action and creating characters worth caring about.  One scene in particular, where Mrs Brisby must stop the farmer’s plow from destroying her home, is one of the best staged action sequences I’ve ever seen in any movie, animated or not.  The movie’s full of other memorable highlights, including the spooky introduction of the Great Owl (voiced by John Carradine), a deadly knife fight between two ideologically opposed rats, and the tragic back story of how the rats escaped the cruelty of N.I.M.H. (the National Institute of Mental Health).  The only thing that bothers me about the movie is how a certain magical amulet is used to contrive a happy ending.  But at least it’s a beautiful contrived ending.

N.I.M.H. is a gorgeous film full of impressionistic backgrounds and vibrant colors, all of which is sent soaring by a spectacular score from Jerry Goldsmith. For me, it works like gangbusters — beautiful, thrilling, spooky, and exciting. It’s my favorite animated film of all.