According to IMDb, this is the most well-liked movie of all time. And true enough, I've never met a person who did not like it. A film about two convicts passing the time behind prison walls could have been an insufferable downer, but there's a mystery behind Tim Robbins' main character, Andy, that keeps you deeply engrossed in Stephen King's story. Andy selflessly inspires the other inmates at increasingly greater risk to himself, eventually becoming almost a folkloric hero by the end. Along the way, he endears himself to a fine cast of supporting players headed by Morgan Freeman as Redd, who narrates the film more beautifully than a film has ever been narrated before. 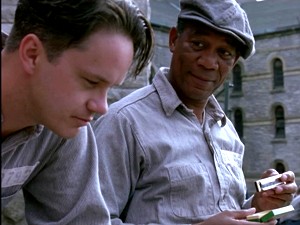 I don’t know why this movie appeals to everyone so well. But for me, I think it has something to do with people truly connecting, as the prisoners of Shawshank do, at a time when they need friendship the most — when it’s the only thing keeping them alive. If ever an audience desired a happy ending, this film delivers it. I would have ended a minute earlier, though, with the image of a bus disappearing into the horizon and Redd’s climactic confession: “I hope.”