Here we have a horror film so classy, it won the Oscar for Best Picture.  Anthony Hopkins and Jodie Foster each deliver career-defining performances as Hannibal Lecter and Clarice Starling, the central characters in author Thomas Harris' perverse contemporary retelling of Beauty and the Beast.  The screenplay balances their provocative banter with a well-constructed mystery surrounding the identity and whereabouts of a serial killer named Buffalo Bill. Ted Levine gives a excellent, unnerving performances as Bill, a man who kidnaps hefty gals and keeps them in a pit. It's from that vantage point you hear the film's infamous (and now campy line): "It rubs the lotion on its skin or it gets the hose again." 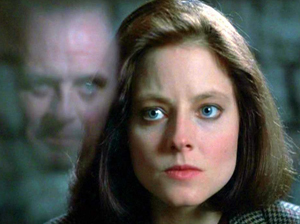 The entire film is washed in rich melancholy atmosphere, thanks to Tak Fujimoto’s muted cinematography and Howard Shore’s brooding score. The scenes inside Bill’s sprawling basement are truly the stuff of nightmares, especially when Starling arrives and the lights go out!