Three desperate men scrape together everything they can muster to go prospecting for gold and discover not just riches, but the destructive greed that comes with them. This is one of John Huston's finest works, a male bonding adventure that doubles as a dark morality tale. Humphrey Bogart is terrific in the leading role, especially when his character begins turning into the monster of the piece. Outside of film noir, you rarely see protagonists like Bogart's go evil without the film losing favor with the audience. Maybe we still feel a little sympathy for him because we see his dark potential in ourselves? 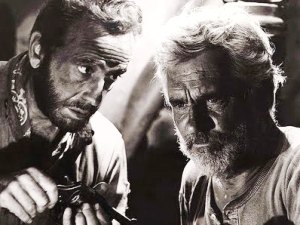 Walter Huston (John’s father) won a richly-deserved Academy Award for his gregarious supporting performance as the oldest and wisest of the three men. John Huston took home two Oscars for the film, one for screenwriting and one for directing. (In 1985, John’s daughter Anjelica won for her performance in Prizzi’s Honor, making the Hustons the only family in Hollywood history to contain three generations of Oscar winners.)