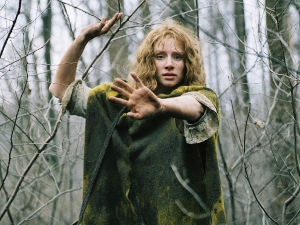 A small, isolated village of puritan-like people come under siege by a killer in their midst, as well as woodland monsters that may not be what they seem… Whether or not you like M. Night Shyamalan’s The Village ultimately hinges upon two big conceits (or twists, if you will). I’m okay with the first, as it comes organically from the hopes and fears of the characters. The second big reveal, however, feels more tacked on — more superfluous, a cocky move on Night’s part. It not necessary to the telling of the story and it strains suspension of disbelief to the breaking point. But if you’re able to disregard the second twist, there is still a lot to admire here. Bryce Dallas Howard, Joaquin Phoenix, Adrien Brody, and William Hurt all give fine performances, and I was very much engaged in their relationships. I also enjoyed the mood and atmosphere, a few nicely staged suspense pieces, and James Newton Howard’s moving score featuring violinist Hilary Hahn. With Sigourney Weaver.