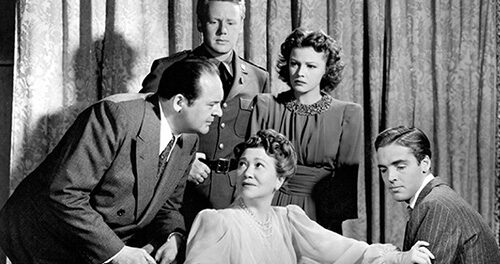 Fay Bainter (The Children’s Hour) stars in this ‘war at home’ drama about a wealthy widow who ignores the effects of WWII even as her son (Mrs. Miniver‘s Richard Ney) is drafted into service. Her stubborn refusal to deal with reality causes a rift between her suitor (Edward Arnold), her daughter (Jean Rogers), and her dim-witted socialite friend (Spring Byington).

As you might expect, something dramatic happens in the third act that snaps Bainter’s character out of her spell. It’s thankfully not the obvious choice, though, and it’s handled better than I imagined it would be. Bainter’s character is so unreasonable for so long, it’s hard to empathize with her. But the entire supporting cast are so likable and engaging, you give the lead character the benefit of the doubt. The second act spends a lot of time on a romantic subplot between Jean Rogers and Van Johnson. Fortunately, the two have chemistry and their storyline isn’t just tacked on for marketability’s sake. It connects with the main story when Bainter disapproves of their marriage and doesn’t attend the wedding.

While the film is primarily a drama, it’s the humorous parts that stick with me the most. Those moments belong to the irreverent Byington and Halliwell Hobbes as Bainter’s butler. The two have one memorable scene together when Hobbes sneaks into a guest bedroom where Byington is sleeping to turn out her lights during a air-raid blackout demonstration.