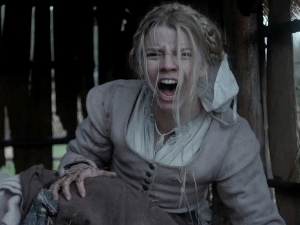 I’ll come right out with it: The Witch is my favorite horror film of the last ten years. Newcomer writer/director Robert Eggers serves up a masterfully creepy tale that’s equal parts psychological and atmospheric, elegant and restrained, but not without some visceral imagery that will haunt you for years to come. The story centers around a New England family circa the 1630s. Having just been banished from their frontier town, they are forced to carve out a slice of wilderness in which to survive, isolated and God-fearful. When their infant son mysteriously vanishes, the family begins to splinter under paranoia. Has witchcraft penetrated their home? Can everyone be trusted?

The Witch deals with the same subject matter as Bill Paxton’s film Frailty, but hits the nail so much more firmly on the head than Frailty did. The Witch transports you to another time and place, smothers you in its eeriness, and surprises you with all-around solid performances from its relatively unknown cast (including some impressive child performances). Eggers’ direction is sure-handed, the production design and music are top-notch. Movies this good are really hard to review, especially when you’re still trying to lift your jaw off the floor. The less you know the better — get thine ass to The Witch. With Anya Taylor-Joy.