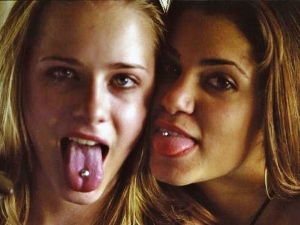 As if pre-teen and teenaged girls didn’t already scare the shit out of me, Catherine Hardwicke (who later helmed the first Twilight flick) had to go ahead and direct this harrowing descent into hormonal angst. Evan Rachel Wood turns in a fine performance as Tracy, a young lady we barely get to know before she’s experimenting with needles, drugs, petty crime, sex, cutting herself, and whatever else the Devil is hawking — all in an effort to be ‘cool’ in the eyes of the hottest girl in school, Evie (Nikki Reed), a pathological liar who who ingratiates herself into Tracy’s home. Holly Hunter was Oscar-nominated for her performance as Tracy’s mom, Melanie. Melanie is far from perfect herself — overcoming alcoholism, struggling to make ends meet by cutting hair out of her home, and lacking in judgment when it comes to the kinds of people she welcomes into her family’s life. In fact, everyone in Thirteen is flawed or damaged in some way, but it doesn’t stop them from trying to do the right thing from time to time. Even Melanie’s coke-head boyfriend (Jeremy Sisto) tries to help out in small ways. It makes Thirteen more realistic and believable that all the characters have these shades of gray. But it’s also terrifying to be reminded that some kids are practically doomed to the gutters when their parents never successfully climb out of them. With Deborah Kara Unger and Kip Pardue.