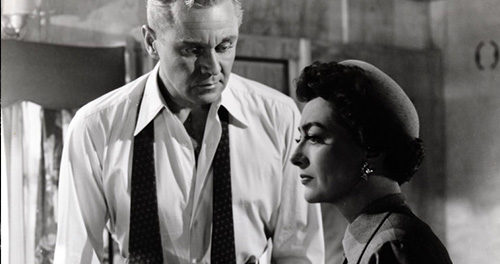 Joan Crawford seems born to play a lady gangster fighting blindness, but unfortunately, This Woman is Dangerous isn’t nearly as interesting as it sounds. The ‘gangster’ aspect of the movie is kept to a bare minimum, with most of the screen time spent on a romance between Crawford and the doctor (Dennis Morgan) who saves her sight. The crux of the story is whether or not Crawford will be a good girl and stay with her doctor boyfriend, or return to her bad girl ways to help her old gangster friends.

I like Joan Crawford in a lot of movies, but I rarely buy her when she’s ‘in love’. And I don’t buy it here. There’s no chemistry with Morgan, and there’s no challenge for Crawford to really sink her teeth into. She’s just going through the motions in what would be her last screen performance under contract for Warner Brothers studios, a contract she was eager to be out of. And it kinda shows. There’s a slightly touching sequence in the middle of the film when Crawford accompanies Morgan to the home of a sick boy he’s checking in on, and the climax is staged in a nifty two-story surgical operating/observation room. But there are a lot better movies in which to see cinema’s favorite tough old broad in action.