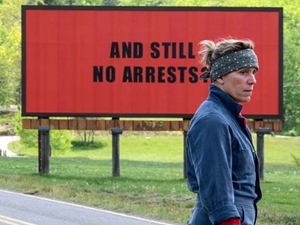 Seven months after the rape and murder of her daughter, a grieving mother challenges her local police department to find the culprit when she advertises on three incendiary billboards. Frances McDormand (Fargo) headlines Three Billboards Outside Ebbing, Missouri, which is being advertised as a comedy featuring fowl-mouthed McDormand chewing the scenery and ripping characters new assholes. And to be fair, that’s definitely part of this movie. But I’m thrilled to say it’s not all. The film is as dramatic as it is funny, and its shifts in tone might occasionally shock you in compelling ways.

McDormand is backed up with two great supporting players. Woody Harrelson plays the police chief and object of McDormand’s targeted scorn. Sam Rockwell plays his possibly racist and not-too-bright second-in-command. It’d be easy to paint Harrelson’s and Rockwell’s characters as villains and let the audience cheer in watching McDormand take them to task. But Three Billboards sets its aims higher than that. All three characters become complicated to the point where you empathize and root for each of them. And while McDormand’s character feels much like a hero in the beginning, you begin to see the cracks in her veneer as well. It ends up being a movie about three very different human beings who are driven by a whirlwind of passion and outside forces to draw lines and take sides. And that should sound very familiar.

Writer/director Martin McDonagh (In Bruges, Seven Psychopaths) has succeeded in making what is probably the quintessential 2017 movie, the one that captures the zeitgeist in a bottle. Three Billboards deals with racism, homophobia, police brutality, domestic abuse, the media, and political activism taken to extremes. But McDonagh’s masterful script weaves all these issues organically into a tale that is ultimately intimate and character-driven. I did not know how this movie would end, and that thrilled me. And the more I think about it, the more perfect the ending becomes.

With supporting performances from John Hawkes and Peter Dinklage.