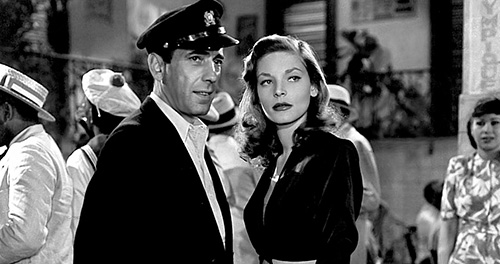 Humphrey Bogart and Lauren Bacall made their first pairing in this adaptation of Ernest Hemingway’s novel about an American boatman (Bogart) who reluctantly sticks his neck out for the French Resistance in World War II Martinique. Along the way he falls in love with a sultry young singer (Bacall) and risks more lives than his own when he agrees to give a pair of freedom fighters secret water passage to the island.

The plot I just summarized sounds serviceable, right? Well, it’s just the starting point for his incredible motion picture because the talent bring it to a whole new level. The most powerful weapon in the film’s arsenal is Lauren Bacall in one of the most spectacular acting debuts in movie history. She oozes smoky charm, drips with wry witticism, and hypnotizes both Bogey and the audience with her smoldering eyes. The chemistry between the two leads is palpable (they married and stayed together through Bogart’s death in 1957). Sincere, believable movie romances are extremely hard to come by. This is one of the best there ever was.

I have to think part of the reason the romance works is because To Have and Have Not is directed by Howard Hawks (Bringing Up Baby, Rio Bravo), one of few golden age film directors who liked his female characters, even romantic parts, to be strong and independent. Hawks also brings his remarkable versatility to bear on the film’s suspenseful moments and a handful of surprisingly catchy little musical numbers. Bacall sings a couple of the numbers and Hoagy Carmichael sings the rest, playing Cricket, the pianist at the hotel where most of the film’s action takes place. Normally, I hate musical interruptions — but in this movie, they’re a highlight.

The screenplay sizzles with terrific film-noir dialogue (accredited in part to William Faulkner). The sets offer an atmosphere akin to Casablanca. Walter Brennan is memorable as Bogart’s lovable drunk sidekick and composer Franz Waxman beautifully underscores the film’s more tense moments. The only possible critical thing I could say about this movie is that it doesn’t start off with a bang. But about ten minutes in, right when Bogart meets Bacall, To Have and Have Not started mesmerizing me.

Thank God that can still happen.