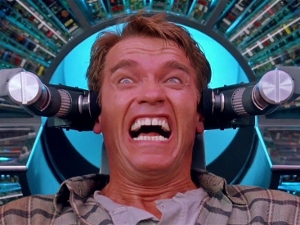 On one hand, I like that Total Recall reminds me of an old-fashioned sci-fi yarn from the ’50s. On the other hand, it’s not quite cheesy enough for me to fully embrace that way. I don’t like Arnold Schwarzenegger in the lead role. He does the film no favors, and I can imagine dozens of other actors who might have helped the movie find the right tone. A more serious actor might have anchored the film more as a drama; a more comedic actor might have anchored it more in the realm of tongue-in-cheek comedy. For me, the movie needed to go one way or the other. Instead, we just have Arnold — the biggest, most bloated, most manufactured Hollywood star of them all, and while I like him in some roles (like Conan or the Terminator), here he just leaves the movie feeling hollow. His jarring performance combines with the overall cheap-looking production design to make a movie that feels like a 7th grade play to me. I know the movie won a special achievement Oscar for visual effects, but I never liked the effects in Total Recall — not even when it came out in 1990. There’s an artifice to the movie I just can’t swallow. I think I’ve seen the movie three times now, spaced out over twenty-four years, and each time I see it, I have the same reaction. Meh. It’s one of those movies everyone else seems to love and I just never got it. Still don’t. But to focus on the positive, I do like Jerry Goldsmith’s score very much, and some of Rob Bottin’s makeup effects are pretty nifty.