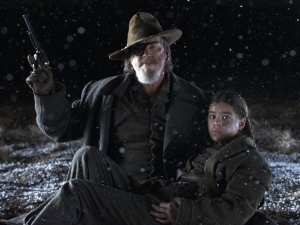 A teenaged girl ropes an aging, alcoholic U.S. Marshall into helping her find justice for her father’s murder. In this age of sequels and remakes, it’s hard to believe one of them could actually be this good. The Coen Brothers take the John Wayne original (based on a book by Charles Portis), roll it in mud, fray the edges, and weave a telling that’s more emotionally engaging and viscerally exciting than the 1969 version.

Jeff Bridges’ take on Rooster Cogburn is less functional and more absurd than John Wayne’s interpretation, but far more interesting to watch. Bridges is electric here. I couldn’t take my eyes off him. Costars Hailee Steinfeld and Matt Damon are also very good, each acting circles around their 1969 counterparts. The character dynamics, already a cornerstone of the Wayne version, are further improved upon and accentuated. Bridges, Damon, and Steinfeld are so much fun to watch together, you almost wish their journey didn’t have to come to an end.

While the Coens are remarkably faithful to the Wayne film (almost scene by scene), their unique style does not go unnoticed. They successfully contemporize the story by embracing its intrinsic dark comedy and mythic nature. The final act, in particular, is much improved in the Coens’ version. Where the Wayne film went about things too earnestly, the Coens veer into legend and folklore, and it just feels so right. I think their version of True Grit will have a long shelf life. I already want to see it again.