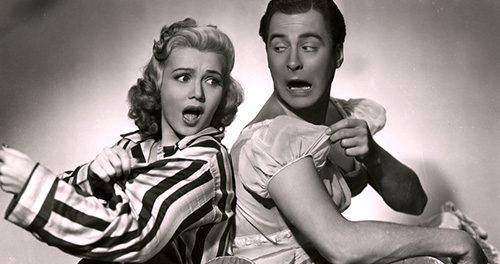 Carole Landis and John Hubbard star as a bickering husband and wife who each believes the other has the easier life. They wish upon a statue of Buddha to trade places, and lo and behold, their wish comes true. Husband then has to deal with the house staff and a conniving wives’ group, while wife has to deal with the corporate business environment.

A fair amount of sexism is to be expected with a gender-swapping body-switch flick, especially one from as early as 1940. But the fact of the matter for this couple is that neither of them has to work very hard. They’re both privileged, pampered people. It is interesting to note the homophobia simmering beneath the surface of all Hubbard’s scenes when he’s channeling Landis’ character, though. Hubbard doesn’t hold back in a feminine portrayal that sees him screaming and sashaying. While I think both Hubbard and Landis are respectful in their drag performances, the film certainly points out how tomboys and tomgirls are treated — she is crazy, while he is weak.

But this is a comedy, and it’s never too mean-spirited. Highlights include house butler Donald Meek’s utter confusion about seeing the madame and master of the house in each others’ night clothes, and Hubbard’s reactions (post-switch) to a handsy chiropractor and a martial arts trainer who’s been instructed to surprise him throughout the day. The ending also holds one of the biggest laughs, when after the couple have switched back into their normal bodies, the Buddha tells them Hubbard — not Landis — will be birthing their baby.