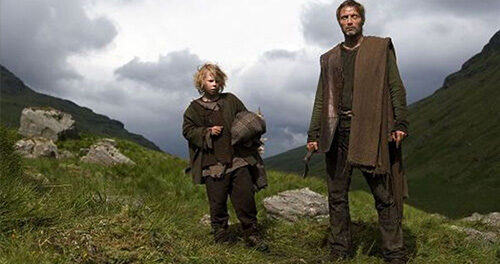 Nicolas Winding Refn (Drive, Only God Forgives) serves up this meditative drama about a mute, one-eyed, pagan strong man (Hannibal‘s Mads Mikkelsen) who fights for the entertainment of his Norse captors way back around the year 1000 AD. He finally escapes and brings a young boy along with him. The two soon take up company with a small band of Crusaders looking for their Holy Land. On a long boat trip, allegiance is put to the test, and when the party hits land long afterward, they realize they’ve discovered anything but a Holy place.

Valhalla Rising features wall-to-wall gorgeous scenery (shot in remote Scotland) and Mikkelsen carries the film as well as Clint Eastwood carried his relatively mute ‘Man With No Name‘ trilogy. Refn includes on-screen chapter titles to reinforce a mythic interpretation of the material, and gives us plenty of time to think about what we’re watching in his long shots of landscapes and faces, accompanied by a droning, hypnotizing score.

Sometimes I find Refn pretentious, but to his credit, he never wraps things up with a patronizing bow. I liked that Valhalla Rising brings up big questions about God (or gods) and our relationship to him/them, dabbles in the mystery of prayer, and makes righteousness the prize in a free-for-all among the film’s factions. Is God Christian? Is God pagan? Is God your father?

I almost always wish Refn’s movies were a little more quickly paced. I don’t need quite as much time to ponder the meaning of his imagery. But Valhalla Rising was beautiful enough to keep me watching, and open to interpretation enough to keep me wondering.