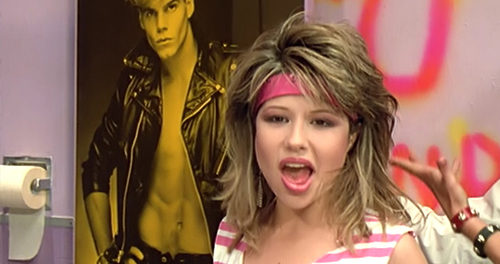 Pia Zadora and Craig Sheffer star in a no-budget sci-fi rock opera that’s so abominable, it’s almost charming. When a bunch of space dudes in pink costumes land on Earth looking for the source of rock music, they find it in Zadora’s singing. While Zadora starts to fall in love with the lead alien guy (Tom Nolan), Sheffer gets jealous and decides to stop being such a douche in an attempt to win her back.

Somehow, Oscar-winner Ruth Gordon (Rosemary’s Baby, Harold & Maude) got suckered into this thing playing the town sheriff — a subplot that has no bearing on the rest of the film and feels tacked on. Michael Berryman (The Hills Have Eyes) also appears as an asylum escapee who buys a bunch of guns and tries to mow down all the attendees at the third act’s climactic musical competition.

Voyage of the Rock Aliens is low-budget and strained enough that you’ll notice abrupt scene changes and continuity errors galore. That wouldn’t matter so much if the songs weren’t so terrible. The soundtrack is wall-to-wall from beginning to end, surely a cash grab for MTV’s attention. And despite tunes from Zadora and Germaine Jackson, you won’t be humming a single melody after watching the movie.

Easily the best thing about Voyage of the Rock Aliens is Craig Sheffer’s body. He’s young. He’s cut. He’s fucking gorgeous. And he’s wearing a leather jacket that drifts open all the time, revealing an abdomen chiseled by the gods. And later on in the movie, he goes shirtless in a musical number opposite a motherfucking puma. Is it cheesy? Is it awesome? It’s Voyage of the Rock Aliens.