My favorite Pixar film features two robots who say little more than each others' names, but somehow, as if by magic, WALL-E manages to convey more emotion than films that try twice as hard to do so.  There's a charming purity in the characters of WALL-E and EVE, who to differing degrees struggle against their 'directives' to form a bond.  The fact that these two odd 'bots end up protecting the last sliver of life on Earth -- a tiny plant -- could have been cloying, but Pixar knows how to handle the material.  When WALL-E finds the fragile vine, he simply collects it in an old shoe and places it on a shelf with other artifacts of a bygone era. 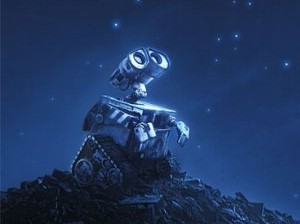 The dramatic implications don’t need spelled out, and that’s the main reason I love WALL-E.  It speaks to the audience almost on a purely emotional level, without anything getting lost in language.  The movie is also an amazing achievement for sound designer Ben Burtt and composer Thomas Newman, who share the task of communicating to the audience what is normally reserved for dialogue.  The second half of the film isn’t quite as brilliant as the first, but WALL-E is a winner overall, combining visual and aural beauty with a heart to match.