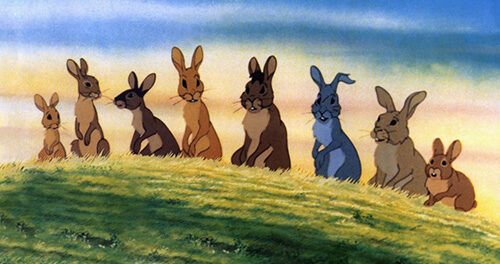 Martin Rosen brings to life Richard Adams’ novel about a group of rabbits who leave their burrows and face a series of deadly hardships in search of a new home. Watership Down is one of the more serious animated films geared toward children. Under its episodic adventure narrative, it’s really a meditation on the ever-present risk and inevitability of death. Not all of the rabbits make it to the promised land alive, and even those who do will still one day meet their maker. Just like many humans, the rabbits have their own ‘god’ and religion to help them make peace with their mortality. In any case, parents of young children should be prepared to answer questions afterward.

I love the aim of the story, both the adventure plot and the thematic angles. I also like the score by Angela Morley and the inclusion of a very moving song, “Bright Eyes,” by Art Garfunkle. But — and I know I’m probably in the minority here — the movie looks ugly. The animation isn’t as polished as what we see from Disney Animation. The backgrounds are muddy-looking and the rabbits are hard to tell apart. Rosen relies on myriad panoramic shots to cut down on the amount of character animation required, but the panoramas are so impressionistic that slowly zooming in on them over and over again only causes the watercolor paintings to disintegrate before our very eyes. Sometimes you can even see the texture of the canvass. Some will admire the hand-crafted, crude quality of the work. I do on some level, but Watership Down is not a film I would ever want to rewatch for its visual merits.