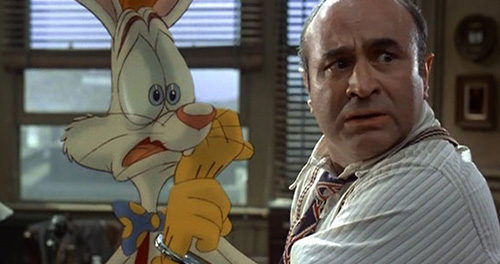 Bob Hoskins stars as a 1940s Hollywood detective who is reluctantly pulled into a murder investigation in which the prime suspect is a cartoon rabbit. Can he overcome his hatred of ‘toons’ and prove Roger Rabbit’s innocence? Or will the real culprit get away with much more than murder? Robert Zemeckis (Back to the Future, Romancing the Stone) directs this hybrid blend of animation and live-action that moves briskly and boasts a lot of period fun and madcap comedy.

A movie concept like this could easily turn into a hollow technical venture, but Who Framed Roger Rabbit wisely anchors the film in Hoskins’ character, Eddie Valliant. Eddie is still reeling from the death of his brother and detective partner, who was killed by a toon in an unsolved case years ago. Since then, he’s become a drunk and a fuddy-duddy. But through meeting the excitable Roger and being dragged into the irreverent life of other toon characters, Eddie slowly comes out of his shell and — heaven forbid — develops a sense of humor that literally helps save the day in the movie’s final act.

Hoskins does an incredible job carrying the film, performing in many scenes without any other flesh-and-blood actors. When you consider all the times cartoon characters interact with live-action sets and props, the special effects wizardry of the film becomes exponentially more remarkable. The film also sets an historic precedent by involving cartoon characters from myriad rights holders all in the same movie, from Betty Boop and Woody Woodpecker to Mickey Mouse and Bugs Bunny. It’s a legal fete we’ll probably never see again in our lifetime.

Who Framed Roger Rabbit also benefits from memorable supporting turns by Christopher Lloyd as the evil Judge Doom and Joanna Cassidy as Eddie Valliant’s stalwart but neglected lady love — some of the best lines in the film come from Cassidy. My favorite is right after Eddie shoves Roger down his raincoat. She quips, “Is that a rabbit in your pocket, Eddie, or are you just happy to see me?” Another big stand-out from the film is the animated character Jessica Rabbit, the va-va-voom, ultra-curvy wife of Roger. She’s voiced (uncredited) by the sultry Kathleen Turner, with a knockout lounge performance sung by Amy Irving. Alan Silvestri’s multi-faceted tour-de-force score is the icing on top of a singularly crafted and supremely entertaining movie.