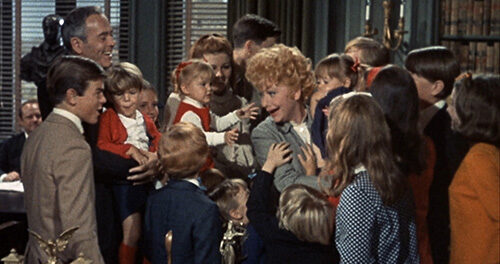 Lucille Ball and Henry Fonda star in this fluffy, family-oriented comedy about a widower with ten children who falls in love with a widow who has eight kids of her own. But do they dare merge their families into a twenty-person household? Yours, Mine and Ours is a charming little flick that quickly won me over with Ball’s and Fonda’s performances and plenty of good humored scenarios.

Comic highlights include physical comedy opportunities from Ms. Ball, who suffers a drunken dinner with Fonda’s family after three of his sons spike her drink. She’s also in a pickle when Fonda takes her to a bar where her slip begins falling down and her fake lashes keep falling off. Fonda plays the film as he would any other — straight as an arrow. His best moments are when the family first move into their new home. He implements his Navy training into the assignment of rooms, towels and bathrooms to all the children. Watching little girls receive their orders and linens from their paternal drill sergeant is its own kind of comedy.

Most of the children don’t get much screen time (how could they?), but Tim Matheson (Animal House) stands out as Fonda’s eldest son. His initial antagonism toward his new step-mother gives way to acceptance in a very sweet way. Seven-year old Phillip (Eric Shea) has a handful of great moments, including an argument with his determined Catholic school teacher about what his legal name is. Tom Bosley (Happy Days) is also memorable as the family’s droll doctor.