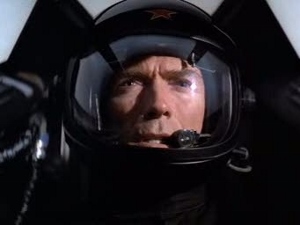 Clint Eastwood directs and stars in this flick about a Russian jet that is undetectable by radar. This is probably my least favorite film in Clint Eastwood’s rather large filmography. The first half of the movie is unbearably boring, and when we finally get to the action, it’s too poorly paced and executed to save the movie. Adding insult to injury, Eastwood’s character is haunted by POW memories that pop up in ridiculous ways, and the film’s climax hinges on some bogus technology that requires more suspension of disbelief than I could muster. Co-starring Freddie Jones.