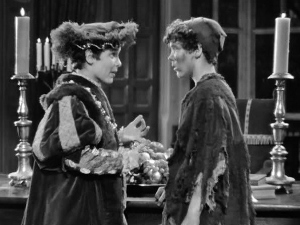 Twins Billy and Bobby Mauch do very well as the title characters in this lavish production of Mark Twain’s oft-told tale of mistaken identity. Claude Rains takes the role of villainy this time, playing an evil Earl who forces the beggar boy to be king for his own selfish gain, while Errol Flynn (at his dashing best) plays the soldier of fortune who helps the exiled prince to reclaim his throne. Beautifully photographed, with spectacular sets and a moving Erich Wolfgang Korngold score, it’s a film hard to resist.