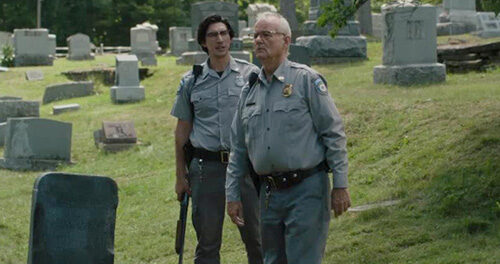 The days become unnaturally long in the town of Centerville, where two cops played by Adam Driver and Bill Murray drive around protecting the community. But when zombies begin roaming the streets, they find themselves in over their heads with only a strange new Scottish mortician (Tilda Swinton) to help them… or not. In any case, as Adam Driver’s character says throughout the movie, “This is all going to end badly.”

It could very well be that I just don’t ‘get’ The Dead Don’t Die. I thought about laughing twice, but was so utterly bored by the first hour that no single joke could possibly bring the movie back for me. It was torture enduring the first hour of this movie. It moves so incredibly slowly. The actors take so long saying their lines. And they wait really, really long before they respond to each other. It was sleep inducing for me.

The second half of the movie gets a little more engaging once the zombies finally come out of the graveyard and walk around being… well, not scary so much as annoying. Writer/director Jim Jarmusch (an indie film pioneer?!) isn’t interested in building suspense, paying off mystery, or presenting anything remotely visceral or emotional. The Dead Don’t Die is simply dull, dull, dull.

Jarmusch has said his movie is an anti-zombie zombie movie, a parody or a satire, or something. But if you hate studio filmmaking as much as Jarmusch professes to, you should really know more about that which you are attacking. Because your blistering social commentary angle has already been done (much more effectively) by the godfather of zombies himself, George Romero. Your comedic take pales to such films as Shawn of the Dead or Zombieland. Not to mention that your makeup effects and horror tropes are outdone by just about any other zombie movie ever made.

I thought at the very least, I’d be entertained by the incredible lineup of actors Jarmusch has assembled. Tilda Swinton has a few moments as the wacky mortician. Driver has some nice, dry line deliveries. Murray has never been more subdued than he is here — even for Bill Murray. No one else has enough screen time to really matter.

As I said before, maybe I just don’t get this movie. I’d like to think Jarmusch and this ensemble cast had a reason for getting together and pulling off this production. But even if you can explain it to me, I still found The Dead Don’t Die to be unforgivably boring.