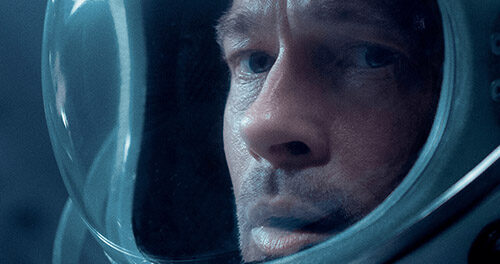 Writer/director James Gray (The Lost City of Z) sends Brad Pitt into space in this film that takes place in the not-too-distant future. Pitt’s mission is discover if his long-lost father (Tommy Lee Jones) is the culprit behind attacks from Neptune that threaten human life on Earth, the moon, and Mars. You can think of it as a journey into Apocalypse Now‘s ‘heart of darkness’, with a little bit of Gravity‘s deadly survival games along the way.

Pitt gives a fine (perhaps Oscar worthy) performance playing a man so restrained that his heart rate never exceeds 80. His character arc, of course, is one from emotionally stunted robot, to a feeling human being. I like what Pitt does with the role, even if the writing itself is a bit maudlin and predictable. I also love Hoyte Van Hoytema’s (Interstellar, Dunkirk) cinematography and Gray’s directorial handling of many scenes, including a deadly buggy chase across the moon’s surface and a spooky surprise on a seemingly abandoned ship.

While I liked a lot of the film’s execution, I have problems with its premise. The journey through space, surviving various trials and tribulations, is fine on its own. But the parallel father/son quest simply does not work for me. The father/son stuff feels tacked on through narration for most of the film, and resolves, well…. stupidly. The film deserves a darker climax, and I think it could have executed its thematic directive much better without Pitt’s constant narration putting too fine a point on things. I also could have done without the wall-to-wall hypnotic scoring, which undermines the film’s exciting moments and makes the film feel a lot more sleepy than it should.

Still, if you can temper your expectations, Ad Astra is still worth a gander. See it for Pitt, see it for the cinematography. Enjoy the journey if you can excuse the destination.