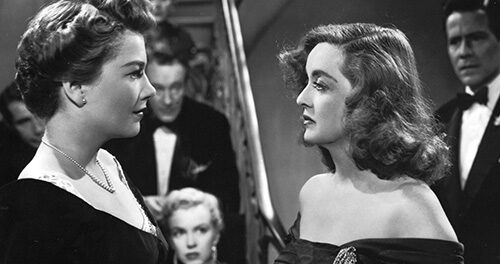 Bette Davis revived her sagging career and writer/director Joseph L. Mankiewicz continued an Oscar streak with All About Eve. Davis stars as Margo Channing, an aging broadway star who takes a sympathetic, aspiring ingenue under her wing. Anne Baxter plays the ingenue and title character, Eve Harrigton. Over the course of the film, Eve ingratiates herself to Margo’s friends and acquaintances, who include a director, a playwright, and a famous theater critic (George Sanders). Margo soon suspects that Eve is using her to achieve her own selfish goals, but her friends can’t imagine that the naive, innocent Eve could be so calculating.

All About Eve features one of the tightest comedy-drama screenplays ever written, ripe with subterfuge, blackmail, jealousy, and a bevy of sharp-tongued one-liners. The cast is one of the best ever assembled for an ensemble piece, led by Davis in what became her quintessential role. Baxter is no less phenomenal as the duplicitous Eve, and George Sanders is delightfully smarmy as a character nasty enough to rival them both. The actor who perhaps doesn’t get enough recognition for the film is Celeste Holm, playing Margo’s best friend whose allegiance temporarily shifts to Eve. Holm’s performance is the most subtle of them all, until a wonderful moment where she gets to laugh out-loud on the audience’s behalf at the absurdity of the script’s character divisions.

All About Eve may not sound like a universal story, but Mankiewicz somehow makes the claustrophobic theater society accessible, and all its players archetypal. There may not be a better film about insecurity, fickle friendship, and opportunistic back-stabbing.