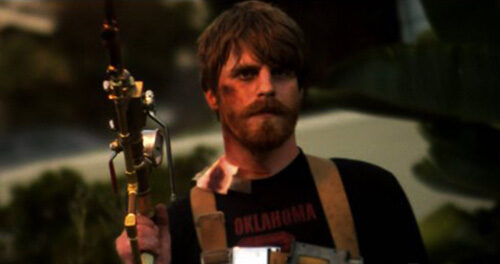 A nice young dude with an obsession for Mad Max and the Apocalypse falls in love with a cool young chick. But when he catches her with another dude, he and his best bud consider going medieval on some people’s asses. Bellflower is a genuine love story that takes some dark turns, supported by an unknown cast who give surprisingly good performances.

Writer/director Evan Glodell plays the main character and Jessie Wiseman plays his love interest. They meet at (of all things) a cricket eating contest and quickly become interested in one another. On a dare, he drives her half-way across the country for dinner on their first date. Along the way, they fall in love. And this is my favorite thing about Bellflower — I believe their infatuation. The actors are so natural and so believable. I felt like a voyeur watching a real relationship beginning to form, and that’s something so precious very few films are able to achieve.

After their relationship falls apart, Bellflower gets dark. Glodell’s character and his best friend (Tyler Dawson) have been working on a tricked-out Road Warrior-like car and have created an impressively dangerous flamethrower as well. You’re never quite certain how serious these two boys are about their weapons of destruction, or just how badly they yearn for the apocalypse to come. Do they want it enough to make it happen? Is love gone sour just the excuse they need? And here’s an interesting side note — is Dawson’s friend character even real, or is he just the devil on Glodell’s shoulder?

The film pulls some punches in the end, but I like the implications it makes about toxic masculinity. Bellflower is an impressive first film from Glodell, who hasn’t released another film since Bellflower won several awards on the film festival circuit in 2011.