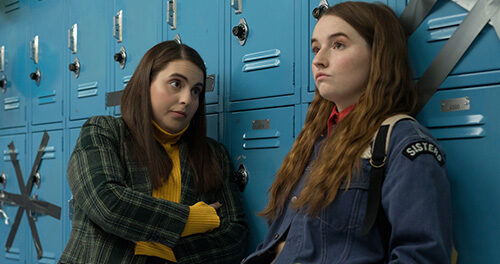 Two academically high-achieving young ladies decide to party hard the night before high school graduation to make up for all the nights they spent studying and doing their homework. Booksmart is about the friendship between these two women and their determination to step out of their shells and connect with their classmates, including romantically.

Kaitlyn Dever and Beanie Feldstein are very well cast in the lead roles of Amy and Molly. They have the comic chops to accentuate the film’s situational comedy, but also the dramatic chops to make you care about these characters and the big life changes they’re going through. Playing Amy, Dever paints a portrait of a nervous gay teen whose afraid to make her first romantic moves on a woman. She’s also been harboring some resentment of her best friend Molly, who has always been more of the ‘decider’ of their dynamic duo. As Molly, Feldstein plays a confident young woman who wants to follow in the footsteps of Ruth Bader Ginsburg and become a Supreme Court Justice. She wishes Amy were as courageous and confident as she is. The two have a conflict that threatens to spoil their overnight adventure, but have faith. These girlfriends ain’t giving up on each other easily.

Under first-time feature director Olivia Wilde, Booksmart is a lot like many teen comedies in its laugh-oriented set pieces and colorful supporting players. What teen comedy could be without porn-oriented jokes and flaming gay theater students? But at least Wilde makes them funny. She also gives the film heart, which is what always sets a teen comedy above the fray. But I think Wilde’s biggest contribution is her style. With a beautiful underwater sequence, a choreographed dance number, a handful of dreamy glamour shots, and a stop-motion animated scene (!), Wilde isn’t just phoning it in — she’s presenting her calling card.

Following in the footsteps of Lady Bird and Blockers, Booksmart further demonstrates that coming-of-age comedies aren’t the exclusive province of men and boys. The ladies have just as awkward a time of it. Many films in this sub-genre are good at exploiting those horrifying or embarrassing moments, but Booksmart also helps us process them.

With Jessica Williams, Jason Sudeikis, Lisa Kudrow, Diana Silvers, and Will Forte. Carrie Fisher’s daughter, Billie Lourde, is a scene-stealer as a manic rich girl who has a knack for popping up when you least expect her. We should be seeing more from her after this movie.