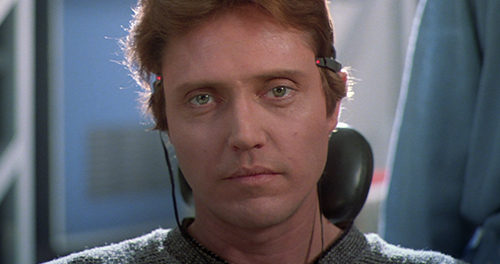 Christopher Walken, Natalie Wood, Louise Fletcher, and Cliff Robertson star as scientists who discover how to record and transmit memories and sensory experiences from one person to another, a direct transference from brain to brain. When their technology is given over to the military, they work to sabotage their creation before it can be put to deadly use.

Brainstorm is directed by visual effects artist Douglas Trumbull, but there are only scant moments of visual splendor in the movie. It’s more of a conceptual, character-driven piece. There are a few provocative notions and great scenes scattered throughout the film, including Fletcher’s character recording her own heart attack, another character nearly dying from being caught in a virtual reality porn loop, and Walken’s character playing back his happiest memories of marriage with his estranged wife, played by Wood. Unfortunately, Brainstorm struggles to hold itself together outside of those centerpiece moments and suffers from a muddled third act that feels incomplete. And it’s too bad, because the script by Bruce Joel Rubin (Ghost, Jacob’s Ladder) has some really emotionally captivating potential.

Trumbull goes back and forth between 1.85:1 and 2.35:1 aspect ratios, which might have been effective on a big theater screen, but less so on modern televisions. The result is a film that, when presented properly on 16×9 TVs, appears letter-boxed and pillar-boxed with black bars completely surrounding the image for more than half the film. (Only the recorded memories and sensory experiences play in widescreen format.)

The film marks the final performance from Natalie Wood, who died tragically before production was complete. Composer James Horner (Titanic, Braveheart) serves up a combination of bombastic dread and ecclesiastic chorus in his marvelous score.