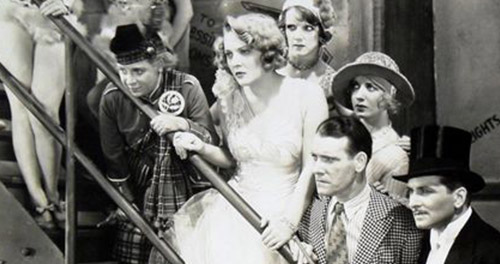 Dorothy Mackaill headlines as a newly-engaged Broadway song and dance star who’s confronted with a ghost from the past on the eve of her retirement. Noah Beery plays the bad guy — a man who tried to rape Mackaill’s character several years ago, and who shows up at the theater to (we assume) try again.

Bright Lights (also known bizarrely as Adventures in Africa) suffers from a trend that emerged among early ‘talkies’. The story is woven around several musical numbers and vaudevillian comic routines that have absolutely nothing to do with the central narrative. These elements prevent any forward momentum in the storytelling — not that the storytelling is all that riveting to begin with. Despite a large set and an impressive number of dancers, the musical set-pieces aren’t as good as they should be and the songs don’t linger in your memory long at all.

The playful and progressive relationship between Mackaill and her betrothed (Frank Fay) almost elevates the film. But the acting is uneven (at best) and so many of the characters look alike that I was sometimes confused. A few of the vaudeville moments are the movie’s only redeeming qualities, especially a bickering husband and wife act who threaten to get violent with each other.