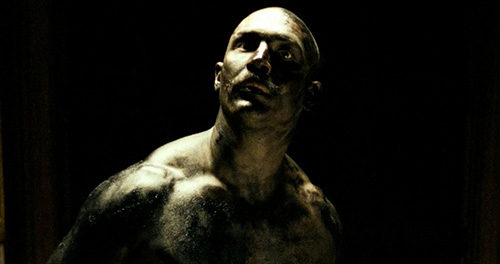 Tom Hardy stars as Michael Peterson, one of Britain’s most notorious prisoners, in this film from director Nicolas Winding Refn (Drive, Only God Forgives). The film starts in 1974 with Peterson’s attempt to rob a post office with a sawed-off shotgun. That stint begins his life behind bars where violent behavior prolongs his sentence. Thirteen years later, he’s released and gets into the world of bare-knuckle boxing. That’s when he adopts the name Charlie Bronson (after the B-movie action star). When a potential romance goes sour, he commits another robbery and gets put back in prison — and he’s been there ever since 1988.

Bronson is an acting showcase for Tom Hardy. Hardy gets to create a character fighting against almost everyone and everything. And yet the character never loses his sense of humor or his ability to surprise us. We get to see a lot from Tom Hardy. And I do mean a lot. Hardy commits to multiple full-frontal fight scenes in the film, including a climactic one in the prison’s art room where he paints his entire body black before beckoning the prison guards to take him down.

Refn’s known for his sleek style, and it’s on display here with well-edited musical montages, operatic scene executions, and even some avant-garde animation. But the style doesn’t override the substance. Refn is careful not to pass judgment on his subject. Bronson is a character study, and while the subject is sometimes violent, it’s worth remembering he’s never killed anyone. Once he’s put in an asylum, he fears being perceived as a ‘looney’ and acts out with the intention of being transferred to a ‘real prison’. But in other instances, the film offers the impression that the occasional prison hostage crisis or physical assault may be committed out of nothing but boredom on Bronson’s part. That, and showmanship. Refn sprinkles monologues from Bronson throughout the film, with Hardy seen in front of a theatre audience, smiling and performing his own life story.

Refn and Hardy bring us inside the criminal’s mind, indicating a desire for celebrity is his perhaps his motivating drive. The film also suggests that cruel punishment may fuel cruel crimes. Bronson has spent a total of thirty years in solitary confinement and is at one point seen trapped in a cage barely bigger than his body. It’s hard not to feel for Bronson, or at least not to empathize with him. My key takeaway from the movie is this: Once society has already branded and contained you, what else have you got to lose?