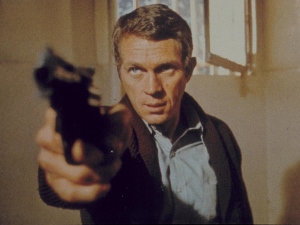 Steve McQueen stars as a San Francisco cop charged with protecting a mobster who is about to squeal for a US senator. When the witness is killed, McQueen works around the clock to discern the identity of the killers before the senator has his head. First off, I have to say that was one of the hardest synopses I’ve ever done. Bullitt is a little hard to follow and understand, but if you run with it, the narrative mostly comes together in the end. Mostly. McQueen is understated and cool in this proto-Dirty Harry kind of role, while Robert Vaughn is suitably smarmy as the pushy senator. Jacqueline Bisset and Robert Duvall appear in smaller roles.

The film’s famous centerpiece scene is a car chase between McQueen’s Ford Mustang and a black Dodge Charger. The scene holds up pretty well more than 40 years after Bullitt‘s release. Other highlights include a hospital cat and mouse game between McQueen and an assassin, and a climactic airport chase. There’s no doubt Bullitt heavily inspired Dirty Harry, released three years later and also containing a groovy Lalo Schifrin score. I like to give credit where credit is due, but Don Siegel and Clint Eastwood tapped into this kind of character in a more compelling way and streamlined the narrative better, too. Directed by Peter Yates.