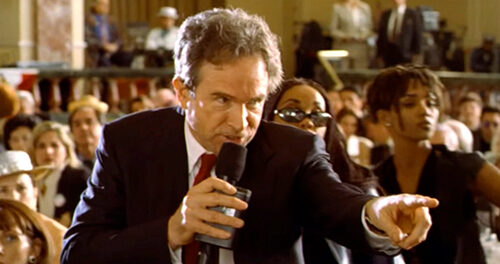 Warren Beatty co-wrote, directed, and stars in this dark comedy about a suicidal politician who puts a hit out on his own life before ending his political campaign with a blunt truth-telling tour that enrages his donors but thrills the general public. When he changes his mind about dying, he spends the weekend evading his anonymous assassin by hiding out in dangerous neighborhoods, all while connecting with the black community and falling in love with a volunteer played by Halle Berry.

Bulworth works because it’s about something we all know about — the corruption in our government, how politicians are bought and paid for to such an extent that the will of the people is rarely done. I enjoyed the movie’s wishful thinking. How wonderful would it be if some of our politicians dropped the bullshit and spoke truth like Beatty’s character in this movie? Beatty does well in the film by not trying too hard to be funny. Instead, he simply reacts to things going on around him, and lets a lot of the comedy come in the reactions of the supporting cast. Oliver Platt is particularly memorable as Beatty’s chief campaign organizer, a man who sees his career spinning around the toilet for most of the movie. The rest of the cast don’t have a lot to work with, but include the luminous Berry, as well as Don Cheadle.

Bulworth reminds me of a movie Hollywood would have made decades ago, perhaps in the ’60s or ’70s, because its not an obvious choice for a studio film today. Its tone isn’t family friendly, its political, it opens up conversation about racism in America, and while it may not buck convention in every possible way, it doesn’t coast into a pat ending. It’s brave enough to put the ending in the audience’s hands.

Kudos to 20th Century Fox’s CEO from 1994-2000, Bill Mechanic, for guiding this project and many other risk-takers (Titanic, Moulin Rouge, Fight Club, Titan A.E.) to the silver screen. No other Hollywood CEO’s output has been as provocative since.