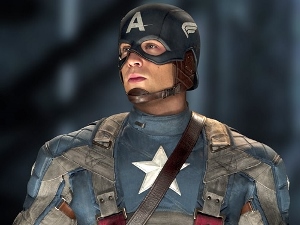 Marvel continues putting its superheroes in line, all leading toward its big Avengers free-for-all. This one focuses on the origins of the Avengers team leader, a weakling WWII soldier named Steve Rogers who volunteers to be part of an experimental ‘super soldier’ program that pumps him up into the shape of beefy Chris Evans. Evans endears you to Captain America more than the script or its execution (I always thought Captain America was a lame superhero). I expected a little more from director Joe Johnston (Jumanji, Honey I Shrunk the Kids), who staged better action sequences in The Rocketeer, a similar but superlative WWII-era super-flick. A train fight set-piece at the mid-point needed to be drawn out and made more emotionally salient, but the climactic aerial battle is pretty cool. Hugo Weaving as the Red Skull is an under-inspired casting choice (he does roles like this in his sleep by now), but solid supporting turns by Tommy Lee Jones, Stanley Tucci, and Tobey Jones give the film some heft.