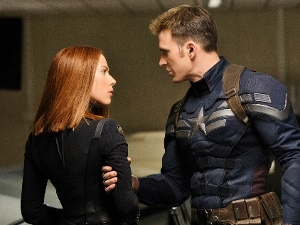 Another installment in the Marvel movie franchise is never going to excite me. But if you want to be distracted for a while, Captain America: The Winter Soldier isn’t bad. The plot centers around conspiracy, betrayal, and assassination — far more compelling stuff than whatever mystical/magical bullshit Thor 2 and The Avengers were about. Chris Evans and Scarlett Johansson are both pretty to look at as Captain America and Black Widow. She is always more interesting to watch than him, but I’m not sure that’s a problem. It just makes me wonder why we haven’t had a Black Widow movie yet. (God, what am I saying? Like we need more comic book movies!) Samuel L. Jackson gets a lot of screen time as Nick Fury, and more Sam Jackson is always a good thing. Oh, and Robert Redford is in the movie. Always good to see Bob.

Didn’t care for the evil, mysterious Winter Soldier. He’s underdeveloped as a character and overused as a sentimental plot device. Henry Jackman’s score kinda sucks, trying too hard to emulate Hans Zimmer’s The Dark Knight. (Even when it’s not Zimmer, we still get Zimmer. So sad.) The third act is nice and explodey, which made the twenty-year olds in my crowd say things like ‘cool’ and ‘bad ass’. I wish that kinda stuff impressed me, but I’ve been there and I’ve done that. Haven’t we all?