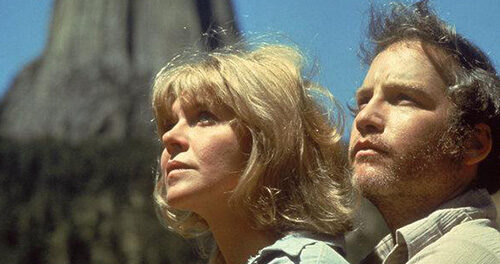 Writer/director Steven Spielberg follows up his immensely successful Jaws with this tale of extra-terrestrials and government conspiracy. Richard Dreyfuss stars as a family man whose encounter with a UFO brings him into contact with a grieving mother (Melinda Dillon) whose young son has been kidnapped by aliens. Together, they are haunted by visions of a mountain. When they figure out their mysterious, shared vision is that of Devil’s Tower in Wyoming, they hit the road, leaving exasperated family, friends, and news reporters in their wake. But Devil’s Tower has been blocked off from the outside world by the government, who evacuates the area with claims of a toxic gas spill. What is about to happen at Devil’s Tower, and will they be able to witness it?

I love all the cast members here. Dreyfuss is always an engaging representative for the audience and Dillon is plenty sympathetic. Teri Garr is memorable as Dreyfuss’ wife, growing more and more concerned about her husband’s growing obsession until she’s forced to take the kids and leave him. And in a grace note of casting, Spielberg got famed French director François Truffaut (The 400 Blows, Wild Child) to play the man spearheading the extra-terrestrial angle of an international organization. His character ends up sympathetic to Dreyfuss’ plight.

Both Dreyfuss and Truffaut exhibit childlike qualities in their performances, which really helps to evoke a sincere sense wonder about what is happening in the movie. But none of the characters are particularly well developed or interesting outside their service to the plot. Close Encounters engages me in its broad strokes — the unearthly abduction of a child, the sight of spaceships and aliens, etc. But its characters can’t carry the film on their own to the degree they did in Jaws, or even in Spielberg’s later film, Jurassic Park. And Dreyfuss’ character makes a climactic decision that has never rested well with me.

Close Encounters of the Third Kind‘s first hour is its strongest, with growing mystery centered around a handful of bizarre discoveries. The initial UFO sightings are really spooky and exciting, and the aliens’ abduction of Melinda Dillon’s son is super scary — augmented with a great child performance by Cary Guffey and John Williams’ incredible score.

The middle portion of the film really drags for me, though. Dreyfuss makes sculptures of Devil’s Tower out of everything from dirt and clay to shaving cream and mashed potatoes before he figures out what he needs to do. It takes forever and gets really frustrating for the audience, who is ten steps ahead of him at least halfway through the insanity. The final act of the film kinda balances out the uneven nature of the film, though. There’s an extravaganza of visual effects during the finale, but the truly magical part comes from watching humans and aliens communicating with each other through mathematics and music — the later of which is brought to life by John Williams’ memorable 5-note motif.

With Bob Balaban. Look for cameos by Lance Henriksen and Carl Weathers.