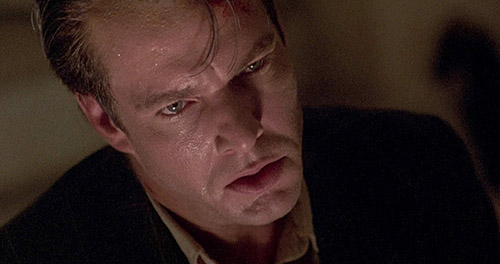 Dennis Quaid stars in this remake of a 1949 thriller about a literature professor who has 24 hours to live, and he spends that time trying to figure out who poisoned him and why. I like Dennis Quaid a lot, but nothing can save this movie from the fact that it was made by pretentious film school hacks with an absurdly improbable screenplay.

Quaid’s dying, right? Never once does he seem focused on finding an antidote or trying to live. As soon as he’s sentenced to death, he just accepts it. If I were dying with two days to live, I sure as shit wouldn’t spend those last two days vetting the litany of suspects this clunky-as-fuck script sets up in the first ten minutes. Is it the estranged wife? Is it the over-eager student? Is it a fellow faculty member? Is it the dean of the college? Is it… oh, who gives a shit. But D.O.A. gets even more laughable by weaving an intricate backstory that connects most if not all of the suspects — one is the unknown son of another, who is the husband of another, and blah blah blah. Oh, and remember how Quaid is supposed to be dying? Well, magically, halfway through his death sentence, he feels perfectly well enough to boink Meg Ryan.

I guessed who the killer was based on casting, but I never suspected the reasoning would be as idiotic as it ended up being. The ending is even worse than I imagined after 90 minutes of rough road. The two directors present a good portion of the film in black & white. There are oscillating fans, shadows galore, and synthy jazz scoring throughout the movie. The film clearly wants to be acknowledged as a return to film noir, and for all its over-the-top effort, it defies logic too many times and forgets to give us a character worth caring about.