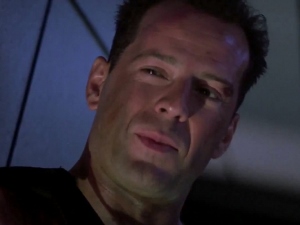 An off-duty police officer takes it upon himself to stop a gang of German terrorists who take an office Christmas party hostage in John McTiernan’s iconic action film, Die Hard. Let me put it another way: Die Hard is The Action Movie. It built a new paradigm for the genre and launched a movie star’s career. Bruce Willis can’t be given enough credit here. He doesn’t play John McClaine just for the macho bravado so ubiquitous of 80s movies. He mixes in some vulnerability and humor that helps make him less ‘superman’ and more ‘everyman’. And he’s given a worthy adversary in the form of terrorist Hans Gruber, played so memorably by Alan Rickman. The movie gets a little silly for me in the final minutes, but it’s otherwise a very tight, well-paced, immaculately crafted film – the best that Hollywood formula could ever hope to offer.