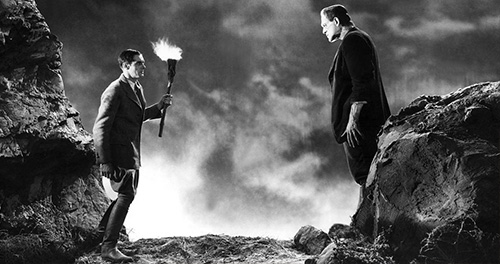 James Whale (Waterloo Bridge, The Invisible Man) directs Boris Karloff in his iconic performance as Frankenstein’s monster in this cornerstone of Universal Pictures’ monster movie legacy. The adaptation from Mary Shelley’s novel is somewhat loosey-goosey, but taken on its own merits, Whale’s film offers a lot of Gothic horror, expressionistic set design, and a handful of indelible images — including the monster’s laboratory ‘birth’ during a lightning storm and a climactic finale at a burning windmill.

The cast is uneven, with some of the ‘straight’ character performances (chiefly Mae Clarke and John Boles) landing with thuds. But the off-kilter characters fair much better, beginning with Karloff’s mute, pantomime title performance. All you have to do is watch a Friday the 13th movie that doesn’t star Kane Hodder as Jason, and you’ll see how casting a random stuntman in a monster role can hurt a horror movie. Karloff performs with his eyes, the selective rigidity of his muscles, and in non-verbal vocalizations both hideous and pitiful. Other actors who hit the right note include the monster’s manic creator (Colin Clive) and his concerned but goofy father, played by Frederick Kerr.

Frankenstein begs for a traditional film score (not yet a matter of course in the early ’30s) and for all the scenes that work, there are certainly a handful — mostly expository in nature — that don’t. But the film has enough magical and spooky moments to have remained a classic for nearly 90 years. And if you find yourself drawn to the film’s scattered moments of tongue-in-cheek humor, just wait until you see the sequel.