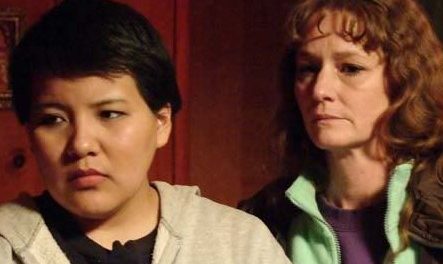 Melissa Leo turns in a fierce, memorable performance in writer/director Courtney Hunt’s story of two women who strike up an unlikely partnership smuggling illegal immigrants to make ends meet. After a Mohawk woman from a nearby reservation steals her car to make a smuggling run, Leo decides to join the woman on her next trip. Both women hate what they’re doing, but the Mohawk (Misty Upham) is saving away money to take her infant son back from her sister-in-law. Leo’s character is trying to move her family out of a dilapidated trailer after her husband ran off with their savings. The women are extremely antagonistic toward each other for quite a long while — kicking each other out of cars and holding each other at gunpoint. But slowly — without any sentimental dialogue or cliched grand gestures — you start to care about their relationship. Hunt paints a compelling portrait of these women. They’re the most restrained, hard-assed version of Thelma & Louise you might ever find.

Hunt ratchets up the tension in her Oscar-nominated screenplay multiple ways. You’ll expect the police to be a constant threat. But you might not expect to bite your nails over the dangers of leaving a fifteen-year-old boy home alone with his five-year-old brother. What will he do when the pipes freeze while he’s trying to make dinner for his brother? And when Leo’s asked to take a large duffel bag with a couple of Pakistani stowaways, why should she think twice about throwing it out the window into the snow? Frozen River is more gripping than I was expecting. And it pays off nicely. Charlie McDermott turns in a commendable supporting turn as Leo’s somewhat combative fifteen-year-old son.