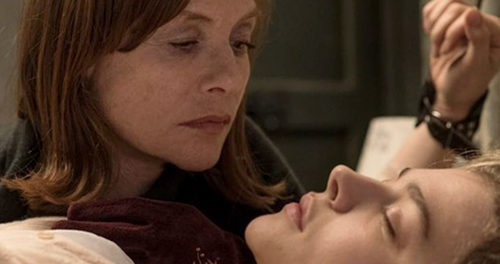 Isabelle Huppert (Elle) and Chloë Grace Moretz (Kick Ass) co-star in this satisfying horror-thriller about a naive young woman (Moretz) who returns a lost purse to a lonely widow (Huppert). The two strike up a friendship, but Huppert becomes too needy. When Moretz tries to break off the relationship… well, let’s just say a lot of bad things start to happen. Greta starts out as an involving psychological thriller and spirals into an honest-to-goodness, entertaining horror flick.

The screenplay is a solid piece of genre writing that reminded me a bit of Misery and The Shining, putting its own spin on the traditional kidnapping and entrapment scenarios. But what really sets Greta a bit above the fray is the dark, beguiling charm of Huppert in a her villainous role, as well as director Neil Jordan’s (Interview with the Vampire) ability to build suspense in a handful of memorable moments. Composer Javier Navarrete (Pan’s Labyrinth) provides a great soundtrack for the film, one that makes creepy usage of pieces from Liszt and Vivaldi. I was also pleased to see co-star Maika Monroe (It Follows), as Moretz’s roommate, put to good use in what could have easily been a throwaway role. With Stephen Rea and Colm Feore.