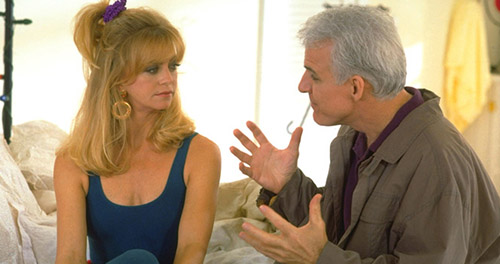 Steve Martin and Goldie Hawn star in this comedy of errors about a con artist (Hawn) who moves into an architect’s empty home and ingratiates herself into his family, his community, and his life. After the initial shock, Martin’s architect character doesn’t mind the con because Hawn’s lies have rekindled interest from an old flame (Dana Delany). Before long, the two stars are in over their heads and (surprise, surprise) falling in love with each other.

A formula comedy comes with its own predictability, but the star power of Hawn and Martin help to counterbalance that. Their best scenes are ones in which they improvise their own imaginary history together in front of inquisitive townfolk. Director Frank Oz works from a serviceable script, which is best during its set-up of impossible scenarios, including a climactic reception dinner in which Martin’s parents and boss meet Hawn’s parents for the first time — her parents being played by two homeless people she met on the street.