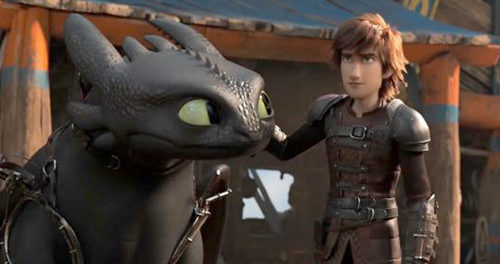 Writer/director Dean DeBlois wraps up the How to Train Your Dragon trilogy with a mostly satisfying finale. In this third film, young Viking Hiccup (Jay Baruchel) and his comrades discover a second, rare Night Fury dragon — and it’s a female. Hiccup’s dragon Toothless naturally falls in love with the new Fury, but when a nasty dragon-napper sets his targets on the two lovers, Hiccup tries to find the legendary ‘Hidden World’ where Toothless and his new lady friend will be safe.

The first two How to Train Your Dragon movies charmed me with their emotional under currents. The Hidden World took a while to hook me. The first third of the movie contains a lot of fighting, shenanigans, and plotting that threatened to put me to sleep. But at the mid-point of the movie, things pick up as Toothless courts the new Night Fury with Hiccup’s help. The third act is another barrage of action that’s almost mind-numbing — and not in a good way. Things happen so quickly, composer John Powell can’t even develop a melodic theme to play out in full anywhere.

I found the character animation a little too exaggerated, but the backgrounds and environments are absolutely stunning. While this is my least favorite of the films, at least it has a satisfying ending — one that builds upon the ‘coming of age’ aspect of the previous two chapters. And we all know how ‘coming of age’ stories end. Bittersweet.