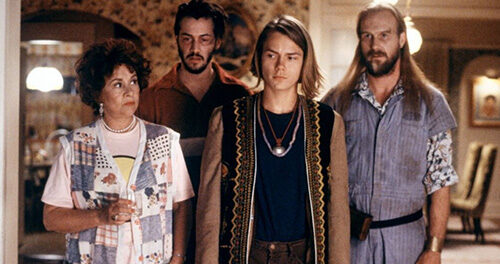 Lawrence Kasdan (The Big Chill, Grand Canyon) directs this dark comedy based on the true story of a woman who tried to kill her husband after learning he had cheated on her. Kevin Kline and Tracey Ullman star as the husband and wife, pizza parlor owners whose love is strong enough to endure anything — even poisoning and two gunshot wounds! River Phoenix plays their new-age bus boy and Joan Plowright plays Ullman’s headstrong Yugoslavian mother. William Hurt and Keanu Reeves round out the ensemble cast as strung-out drug addicts hired to help the family finish off Kline — who proves more difficult to murder than any of them ever imagined.

It may sound unlikely material for a comedy, but I Love You to Death is one of my all-time favorite comedies. Another cast might be able to make the obviously comedic parts of the movie work — primarily the second act sequence in which the murder plot begins in earnest. But this ensemble wins you over from the start and keeps you engaged through their charisma and comic timing. Ullman is a comic mastermind, but here plays the ‘straight’ character that grounds the underlying drama. Everyone else, though, is at their comedic best. Kline finds a precarious balance between lovable and despicable (similar to what he did in A Fish Called Wanda). Hurt and Reeves are hilarious as the hired hitmen who all-too-easily stray from the task at hand, and Joan Plowright steals the show with a pile of hilarious one-liners that underscore her warped perception of America.

I’ve watched this movie so many times, that I’ve also come to really appreciate some things about it that might go relatively unnoticed in just one or two viewings. Aggie Guerard-Rodgers’ costume design and James Horner’s music work wonders to help the film strike just the right tone — a dark comedy with heart.