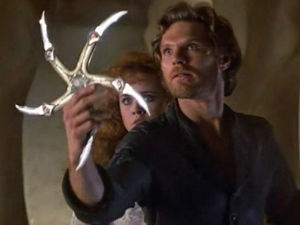 An ambitious fantasy adventure that throws a slew of familiar fantasy staples into a well trodden tale. But what it lacks in originality Krull makes up in style and spirit. Ken Marshall plays Colwyn, a young prince who must rescue his bride-to-be (Lysette Anthony) from a galactic Beast. Marshall brings a little Errol Flynn to the role, but the screenplay remains too superficially archetypal for any truly memorable characters to develop. The cast also includes Liam Neeson and Robbie Coltrane in early film roles, as well as eccentric British actor Freddie Jones, and the lovely Francesca Annis as the doomed Widow of the Web (one of my favorite parts of the movie). Where Krull excels is in its aesthetic accomplishments. The sets and wardrobes are bold and original in their design, and James Horner serves up one of my favorite soundtracks of all time. The visual effects are also pretty impressive for a fantasy film from the pre-digital era. Directed by Peter Yates.