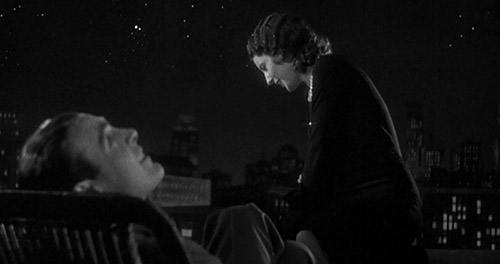 Behold the glory of Barbara Stanwyck. One of classic Hollywood’s sassiest broads makes a big splash in this early talkie that’s leagues ahead of other early 30s flicks in terms of story, craftsmanship, and performance. Babs plays a “party girl” (we know them as escorts now) who serendipitously winds up hitching a ride in the middle of the night with a fuddy-duddy artist. Both are escaping their respective social scenes, and the sparks begin to fly as soon as they see each other. Granted, leading man Ralph Graves is no match for Stanwyck, but he holds his own here and there.

Stanwyck agrees to pose for the painter and can’t help beginning to fall in love with him. His signals are hard to read, so she tries not to get her hopes up. Normally, this kind of rom-com annoys the crap out of me. But Stanwyck sells it. I invested heavily in her character. By the mid-point, there’s a pretty amazing sequence where she spends the night at his house — in a French window bed, not in his bed. We know her feelings about the relationship, but we don’t know his. But then that bedroom door creaks open, and his feet are seen lightly stepping over to the window. She closes her eyes, pretending to be asleep. Then his hands are seen placing a blanket over her. And once he’s back in his room with the door closed, she opens her eyes and smiles. It’s a marvelous, wordless way to convey a blossoming relationship.

Did I mention this film is directed by Frank Capra (It’s a Wonderful Life, Mr. Smith Goes to Washington)? Capra’s miles ahead of the pack here, staging scenes with complexity and focus, moving the camera a lot, utilizing miniature photography, and experimenting with sound design. While the dialogue includes a fair amount of the expected (and desired) repartee, Capra also makes the most of wordless moments — even more than in the scene I previously described. And in most cases, it’s the subtle facial expressions of Stanwyck that drives the narrative forward.

I liked Barbara Stanwyck quite a bit before seeing Ladies of Leisure. But this is probably my favorite of her performances I’ve seen so far. It may not sit well with some feminist viewers, but social politics aside, I thoroughly enjoyed watching her tough veneer crack away to reveal a much more tender side. It’s a dynamic, star-making performance.

Marie Prevost is also a scene stealer as Stanwyck’s roommate, a fellow ‘lady of the evening’ who delivers a few of the film’s best lines in a voice like Betty Boop. Joseph Walker’s cinematography is also a highlight.