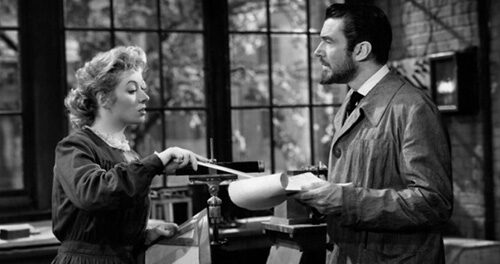 Greer Garson and Walter Pidgeon reteam in Mervyn LeRoy’s biopic of Madame Curie. Garson plays the title character, Marie Curie, the first woman to win a Nobel Prize and the first person to ever win two of them. This film version of her life story splits its focus between her private life with husband Pierre Curie (Pidgeon) and their joint discovery of radium.

Madame Curie works far better than I ever imagined it could. The shy, awkward courtship between Marie and Pierre is charming, especially when Pidgeon makes a desperate attempt to keep Garson from leaving Paris for Poland. He compares their collaboration to a chemical compound and keeps his rationale purely scientific, but you can tell he’s just head over heals for her. Their relationship is depicted as very respectful and academic at first, but it becomes more affectionate over time. The characters might have come off less endearing if not for the tried and true chemistry between Garson and Pidgeon, who previously costarred in Mrs. Miniver and Blossoms in the Dust and would go on to star in six more films together.

Madame Curie also surprised me with how engaging it makes the discovery of radium. From the first mysterious clue to the four-year process of isolating this new element from others, the scientific method has never been more dramatically portrayed in film. It becomes an obsession for the Curies, sometimes threatening to get the better of them. But their shared passion for science sees them through every hardship and pays off in a beautiful moment when the two find their new element glowing in a darkened corner of a dilapidated college shed.

The third act hits only a few highlights of the couple’s later life, including a tragic street accident that changes Marie’s life forever, and a climactic, impassioned speech about the spirituality of science twenty-five years after her discovery.