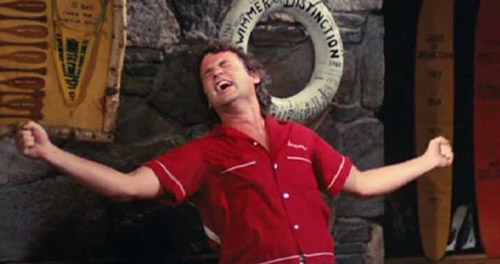 This dopey but harmless summer camp movie helped lead the charge of ’80s teen comedies that would follow in its wake. It’s tame by comparison, but noteworthy for being the first pairing of director Ivan Reitman and actor Bill Murray, who would later bring us Stripes and Ghostbusters. Fellow frequent collaborator Harold Ramis is even one of the screenwriters here. But there’s not a lot of indication in Meatballs of how far any of these men’s careers would eventually go. Not that Meatballs is bad. It’s just not terribly funny, either.

Murray plays the defacto head of the camp counselors, a group of lustful young people who watch over the children’s sporting antics during the day and try to get into each others’ pants at night. But don’t hold your breath for anything remotely scandalous — Meatballs is strictly an over-the-clothing affair. Murray — in his first major film role after leaving TV’s Saturday Night Live — has the most charisma of anyone in the film. It’d be nice if any of the adult supporting players could rival him, but not a single one of them leaves any impression. The film’s best scenes are a handful of overly-charming ones between Murray and young Chris Makepeace (My Bodyguard), who plays the obligatory shy kid Murray takes under his wing.