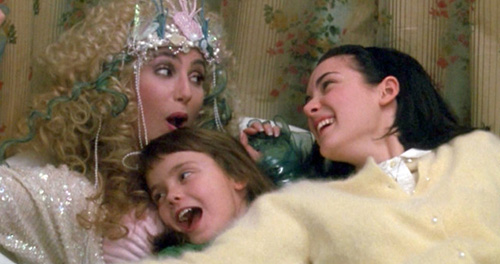 Winona Ryder and Cher give us their take on the classic mother/daughter divide in this adaptation of a novel by Patty Dann, directed by Richard Benjamin (The Money Pit, Little Nikita). Ryder’s character is of high school age and tired of being moved from town to town by her colorful but slightly slutty single mom (Cher). Things become especially trying when the family (including a little sister played by cherubic young Christina Ricci) sets up house in a Massachusetts town where Ryder develops the hots for a young man working at a local convent, and Cher takes a shine to a friendly shoe salesman played by Bob Hoskins. Skip past the loss of virginity, a pregnancy scare, an arbitrary near-tragedy, and a lot of buried feelings that eventually see the light of day, and you have Mermaids.

Mermaids is told from Ryder’s point of view, which is great for her weird little idiosyncratic character — but bad for Cher’s. I was fascinated by the mother character, but I wanted to understand her better before the credits rolled. I needed more explanation for her intermittent aloofness and aggression. Even with that void unfilled, Mermaids has a stellar cast. Cher and Ryder are at the top of their game, and let’s also celebrate the great and underappreciated Bob Hoskins here. He and Cher have real chemistry here — it’s as wonderful as it’s surprising. Even Christina Ricci, in her feature film debut, shows an early glimmer of star potential.

Mermaids is not a high concept movie. It’s not that every movie has to be. But it’s also not a terribly original movie, or one that adds much to canon. The screenplay’s middle act gets aimless while whimsy sometimes prevents anything serious or revelatory from rising to the surface. I don’t think the mother or the daughter really changed or learned much through the course of the film, which leaves me wondering why their story is one worth watching.

But the cast alone makes it worth your while with Mermaids. See it for Winona Ryder’s awkward teenage rebellion and sexual awakening. See it for the improbable but compelling pairing of Cher and Bob Hoskins. And you’ll get some nice ’60s wardrobe and production design on the side.