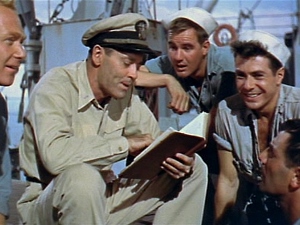 Henry Fonda is caught between a beleaguered WWII cargo crew and their vindictive captain in this oddly cheerful, lightweight drama directed by John Ford and Mervyn Leroy. James Cagney hams it up as the nutcase captain while William Powell makes a graceful big screen exit as the ship’s doctor. Jack Lemmon won the first of his two Oscars for his supporting role as an angsty ensign. It’s a fluffy piece of work made watchable by its sheer star power. Composer Franz Waxman must have missed the “fluffy” memo — he goes bombastic in the strangest places here.